We have some of the amazing people from the podcast The Game of Rassilon on to talk about the weird episode from 1981!

Logopolis is the seventh and final serial of the 18th season of the British science fiction television series Doctor Who, which was first broadcast in four weekly parts on BBC1 from 28 February to 21 March 1981. It was Tom Baker’s last story as the Fourth Doctor and marks the first appearance of Peter Davison as the Fifth Doctor and Janet Fielding as new companion Tegan Jovanka.

The serial is set on the planets Earth and Logopolis. In the serial, the Doctor, a time traveller from outer space, forms a temporary truce with his arch-enemy the Master (Anthony Ainley) to stop the unravelling of the universe which the Master had started by accident.

Alerted to impending trouble by the TARDIS’s Cloister Bell, the Fourth Doctor decides to stay out of trouble, and instead repair the TARDIS’s broken chameleon circuit by materialising around a real police box on Earth and recording its exact dimensions with Adric’s help. With those, he can give the mathematicians of the planet Logopolis the right block-transfer computations to repair the circuit. The Master learns of the Doctor’s plan, and materialises his TARDIS around the police box first, causing a recursion loop with the Doctor’s. The Doctor eventually breaks his TARDIS out of the loop, but when they step outside, he sees a figure in white, the Watcher, telling him to go to Logopolis immediately. En route, they find they have gained a passenger, Tegan Jovanka, an airline stewardess who entered the Police box seeking help for a broken-down car.

At Logopolis, everything seems normal as the Doctor provides the Monitor, the lead mathematician, his measurements to give to the others and perform their verbal calculations. They soon discover that the Master had arrived first, with several of the mathematicians killed by his tissue-compression eliminator. The Master’s TARDIS materialises, and he and Nyssa, under his hypnotic control, seize the control center and use a device to silence the other mathematicians, demanding the Monitor to explain the purpose of a radio telescope on the planet. The Monitor begs for the Master to stop the silencing device. The Master does so, but to the Monitor’s horror, the mathematicians remain silent, and they find the planet starting to turn to dust. The Monitor quickly explains that their calculations were used to power Charged Vacuum Emboitments (CVEs) which were used to funnel off excess entropy from this universe to prevent its approaching heat death; without the CVEs, entropy is taking over. The Monitor urges the Doctor to use their program to open a CVE, before he disintegrates. The Doctor and Master agree to work together and, after releasing Nyssa, bring Tegan with them to the Master’s TARDIS and depart for Earth. Adric and Nyssa try to follow in the Doctor’s TARDIS, but initially end up far outside the universe, and watch as entropy obliterates the sector of space with Nyssa’s home planet, Traken. However, they fix the controls to track and follow the Master’s TARDIS to Earth.

On Earth, the Doctor and Master use the radio telescope of the Pharos Project – from which the Logopolians modeled theirs – to send the CVE program, while the Doctor’s companions help to waylay the project’s guards. However, the Master locks the Doctor out of the control room, and broadcasts a message across space, effectively blackmailing the rest of the universe to submit to him before he activates the program. The Doctor climbs out onto the telescope to stop the broadcast and reinitiate the CVE, ending the Master’s threat; the Master quickly flees and escapes in his TARDIS. The Doctor falls off the telescope a great distance, as Adric, Nyssa, and Tegan gather around him. The Doctor has visions of his past companions and enemies. His three companions see the Watcher appear, and the Doctor explains that “It’s the end… but the moment has been prepared for.” The Watcher touches and merges with the Doctor, causing him to regenerate into the Fifth Doctor. 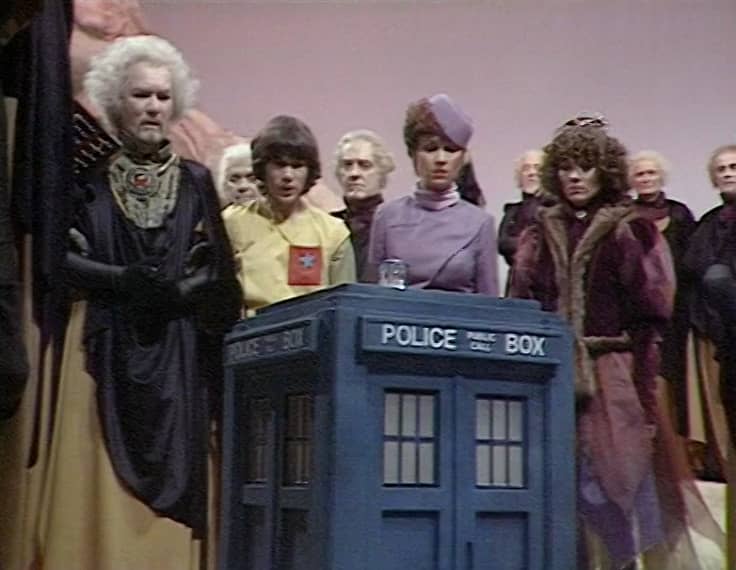 The Game of Rassilon is one of those “actual-play” podcasts, except instead of playing D&Dor Pathfinder we’re playing the Doctor Who Roleplaying Game by Cubicle 7. Telling stories with a brand-new Doctor exploring time and space with a crew of unlikely companions, with an emphasis on great stories and, we hope, big laughs.

Subscribe to the podcast on iTunes, Spotify, Google Podcasts, or any podcast app! Also, check out their amazing website!